Everyone is afraid… Writing prompt: fire

I am taking a writing class and I really love it. The prompt this past week was: breakfast. Here’s where breakfast took me….. funny how that happens. Feel free to use this prompt and write a 500 word or less post to join me.. (and yours can actually be about breakfast! haha)

He came into the world in the middle of a sweltering Michigan summer and the hospital air conditioning gave a welcome relief to the heat and humidity. For months I had planned exactly how this moment would go. The birth was harder than I imagined, but I was so relieved to meet my son that I almost forgot about the pain instantly. After what seemed like an eternity of being alone the neonatologist came to announce her predicted diagnosis: Down syndrome. After a longer than normal hospital stay and a slew of tests we’d leave with another diagnosis: a VSD and a PDA- minor heart complications that may or may not need surgery. Only time would tell.

I was young and uncompromising and refused to know the baby’s gender in utero, didn’t do any prenatal testing, was determined to avoid medication, and planned to breastfeed. The lactation consultant came in to let me know he’d probably never nurse. “Their mouths are weak, “ she informed me. I was also reminded that we wouldn’t know how his heart would heal and that could negatively impact his feeding and weight gain as well.

I left the hospital with a rented commercial grade pump, tiny bottles, syringes, and their backup plan- infant formula. “For when you need it,” they said.

I pumped every couple hours for an hour’s time and then syringe fed my baby drops of precious milk to avoid nipple confusion for weeks. I was exhausted and yet completely determined. Eventually the bottles faded away and I could feed my baby without equipment. I would cuddle up on the couch with my baby and turn on the tv show Alias. Eventually he learned that when he heard the intro song he’d start moving his head to find his milk!

At his four month check up the pediatrician weighed my son and then began the usual litany of questions- including “how’s he sleeping?” I wake him up every four hours to eat, I said. She stopped and looked at me with a slight smile and warm eyes. “He’s 17 pounds, you can let him sleep through the night.” I can only imagine I exhaled a huge sigh of relief- oh sleep, beautiful sleep.

At 6 months he had a follow up with a new cardiologist. The cardiologist was encouraged by his strong weight gain. He asked me if my baby had any “other” medical conditions. “No,” I answered. He continued to examine him- looking at his profile, his eyes, chin, and hands. After another series of questions I finally said, “Well, he has Down syndrome too you know.” “No, I didn’t know! Don’t you think I’d want to know that? That is a medical condition.”
I felt so small sitting in his sterile exam room. I was holding the little baby I had been so proudly feeding independently, only to be reminded that his accomplishments would always be compared with the same two heavy words: Down syndrome. 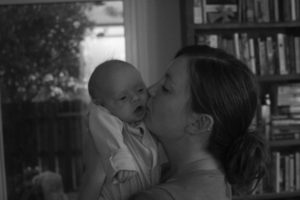