The Great Rubber Band Wars of 1965 Longing for Liturgy

I too struggle a lot with doubt, especially when I’m inviting people to let themselves be connected to painful memories and experiences and offer that pain to God with the hope that this is the path to joy. I mean, I’ve walked with a lot of people on this journey and at some level I’ve seen “proof” that God really comes to us in the midst of suffering. And I myself have tasted healing and newness of life that I believe is the fruit of coming into eternal life [that I think begins here on earth as we enter into the kingdom of God, not something that starts after we die]. On the other hand, I have wrestled in my own life with sins and struggles and pain that seems to come around in cycles and never quite go away, which leaves me feeling in my darker hours like nothing ever changed in the first place. I’ve also been helped by my friends who, even in the midst of their own struggles, have held on to faith for me, believing that I am in God’s hands and he is really there and I really belong to him.

Then I had a weird experience. I think it was in September 03, when I flew back to Louisville KY, to help sort out some of my mom’s affairs. I was in a deep depression. That doesn’t seem adequate to describe the darkness and despair I was feeling. I felt like I was in a different plane of existence from all those around me, unable to be touched by them. This depression also brought the loss of the feeling of God’s presence. Overwhelming feelings of doubt and despair washed over me. I felt trapped in a life where I had the surface of a happy, fortunate life, but couldn’t feel any of it. I couldn’t feel any of the good things present in my life. I wrestled with a lot of doubt, feeling like I may have committed my life to a direction that was really a crock. My memories of this time of depression [which didn’t end until May of 04] are like a dark, brooding dream. I felt tired of existing, but was unwilling to inflict my death on those around me. Trapped. Despair. I constantly strained to believe God existed, Jesus was real and I was actually a Christian. For the first time in my life as a believer, I didn’t take communion because I felt I would be saying something untrue about myself. Shortly after this, I left for Louisville. I was traveling by myself. On the plane I was listening to Village songs and talking to God about my unbelief and my despair and how I was unable to lift myself out of it. So I was asking God to help me out and Psalm 148 came on my mp3 player. Karen is singing:

“When I look into the heavens/Golden skies declare your glory/and I see your whisper/swirling clouds above me/revealing your silhouette.” As I’m looking out my window, I see this unbelievable cloud formation. We are flying above this flat of clouds that stretches out as far as I can see. Then, there’s these different clouds that rise up forming a galloping horse. At its feet are a spray of clouds that look like rising dust. It really looked like a galloping, white horse coming straight toward me. And in that moment, somewhere deep inside I said, “Of course, I believe in you, God.” And I felt connected and chosen and experienced a glimmer of hope in my darkness. I feel a good bit of shame about this vision and the faith that it sparked. I think it’s because I just can’t find a rational explanation for why this would generate faith. God tells me that faith is not about reason; it’s about the heart. When I was working on an adobe photoshop compilation to depict this vision, my 9-year-old son Jesse asked me about it. I told him about the cloud formation and his response was, 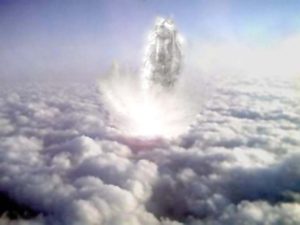 “Maybe God put that there just for you.” I told him I thought he was right and how God had helped my faith with it. So the picture is a merging of photos and sketches from the internet to approximate what I saw. It’s really pretty close. I still struggle with doubting God’s existence in my overactive brain, but I have to say, somewhere at the core of me, it’s been settled for now.

But none of this is proof of anything, because in the end we’re choosing to believe something that can’t be proven. Ultimately doubt is not really the opposite of faith, but rather some element of it. I mean, if we could prove it all, it would be sight not faith—which doesn’t mean I don’t sometimes feel foolish for having faith in the first place. And our intro to the Apostles’ Creed is what we’re left with: this is our statement of faith, we say it because it’s what we believe, to remind ourselves that we believe it and to help each other hold on to faith. And when push comes to shove, it’s by grace we have been saved; I don’t have to get it all perfectly right, not even my faith/doubt ratio. And I’m glad that I’m not in this alone, because that seems too impossible and lonely. I love you all and I’m glad to be on the path with you.